Why Mornings are the Best Time to Make Fundraising Calls

Is there a right time and a wrong one for a political candidate to make fundraising calls?

Throughout my career I did not believe there was.

I’d learned that good fundraising is done by a candidate who plants their butt in a chair and makes phone calls for a solid block of time several days of the week.

The time of day I think candidates should be making those calls has though.

Most political candidates block off two or three hours in the late morning or in the mid afternoon to call potential donors.

You should be successful whether you make your calls in the morning or the afternoon, as long as you do the work, right?

A few years ago finished Daniel Pink’s new book When: The Scientific Secrets of Perfect Timing. 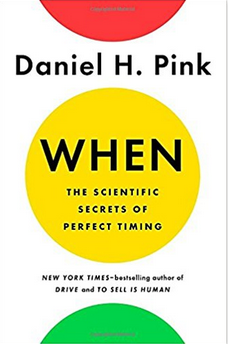 I was struck by something in the first chapter that suggested fundraising calls would be more successful if made in the morning.

Citing the work of professors Jing Chen, Elizabeth Demers, and Baruch Lev in their study “Oh What A Beautiful Morning! Diurnal Variations in Executives’ and Analysts’ Behavior: Evidence from Conference Calls,” Pink wrote the following about the quarterly earnings call of publicly traded companies:

Calls held first thing in the morning turned out to be reasonably upbeat and positive.

But as the day progressed, the “tone grew more negative and resolute.”

But in the afternoon, negativity deepened again…

Given the deep implications of their findings the three researchers concluded:

…an important takeaway from our study for corporate executives is that communication with investors, and probably other critical managerial decisions should be conducted earlier in the day.

And one I think political candidates should take seriously.

Many people you will likely be calling to ask for campaign contributions are in business.

If more positive business decisions are being made before lunch, then you should be dialing for dollars during that window of time.

While there’s also a rebound in the afternoon after lunch, you don’t know when the person you’re calling goes to or returns for lunch — or if they were busy and skipped their midday meal the day you call.

The research shows though, that calling in the morning to request a donation would clearly be your best bet.

And if you decide to read Daniel Pink’s When you’ll probably never schedule a doctor’s appointment in the afternoon again either.

You will also find very good reasons for taking a nap in the afternoon.

But only about a twenty minute snooze to recharge your batteries before you hit the street to knock on the doors.