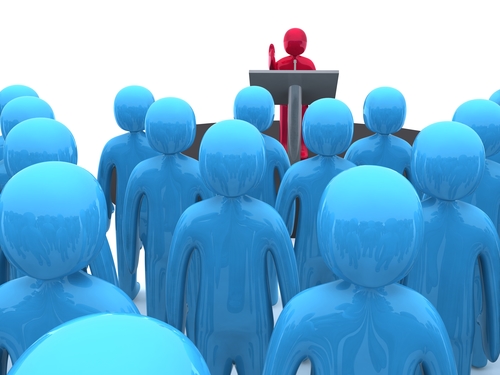 As a candidate for elected office you’re going to be giving plenty of speeches, so you’ll need to have your stump speech down pat.

It assures donors and supporters that you’re the right person for office.

Unfortunately, too many candidates are not good public speakers.

They don’t have a key message or theme.

Their words wander all over the place.

They don’t make sense and wind up confusing their audience.

I witnessed this the one night by a candidate who is running his own campaign.

He had good ideas. He had a solid resume.

His speech however did not effectively convey that he’s up for the job.

With a little fine-tuning he would be much better.

A good stump speech makes a huge difference in a candidate’s race, their fundraising, and in gathering endorsements.

That’s why I always work with my candidates on their stump speeches.

I’ve even turned the things I teach candidates into a premium course The Secrets of a Winning Stump Speech.

Most of my clients have never ran for office before.

They’re not used to public speaking, even in front of small groups.

Over the course of my career, I’ve noticed that there are six key components that make for a good stump speech.

If you follow these, you’ll be in good shape as a candidate and might even surprise yourself as a public speaker.

1.  Who You Are and What You’re Running For

Never assume that the voters know who you are.

Your mission as a candidate for office is to build your name recognition and support for your candidacy.

Even if you’ve been introduced by someone, always begin your stump speech by telling your audience who you are and the office your running for.

If you’re married, say so and tell them how long you’ve been married.

If you have children, list your kids and how old they are, and what kind of things they’re into.

Should your spouse, children, parents, or other family members be present, be sure to point them out by name and thank them for their support for your campaign — especially if it’s your spouse.

It’s a cardinal sin in the political world to not introduce or thank your spouse.

Voters like to elect real people from real places with real lives.

After you introduce yourself and the office you’re running for, tell them where you grew up, a little about your family life, and how that impacted your life.

If you’re running in a community where you’ve lived all of your life, or most of it, make sure that’s highlighted in your stump speech.

Mention the schools you went to, where you played sports, your first job in town, your favorite place to eat, or that your parents still live there.

This creates an instant connection with the voters and will make it easier for them to become supporters.

They want to know that you’ve accomplished something in your life.

In your stump speech, tell them about where you graduated from college (if you did), your military service (if you served), the jobs you’ve had (if you’ve never had a job or a business  — why are you even running?)

Voters want to know these things for two reasons:

1) it shows you can set goals and accomplish them

2) it demonstrates you’re not afraid of hard work

This is especially true in today’s political environment when the perception of elected officials is that they’re only in office to cash for themselves and their family members, rather than work hard and accomplish something for their constituents.

Have you noticed that critics of both Joe Biden and Donald Trump each use this line of attack?

Talk about your professional experience — the things you’ve done and learned that have prepared you for office.

If you volunteer or are active in community organizations, put this in your stump speech.

But please be careful not to come off as bragging.

That will turn off voters rather than endear them to you.

If Trump who can get away with so much that other candidates cannot is still damaged by this, don’t think you’ll fare any better.

4.  What You Want to Accomplish

They want to know why you’re running for office and what you intend to do once you’re elected.

The best way to clarify this is by understanding what your campaign is about in one sentence, as detailed in this article.

When giving your stump speech, incorporate your One Sentence into your remarks and build upon it.

It’s best to have three specific things you want to accomplish.

Your goals should align with three problems that need to be fixed.

Hopefully you’ve done some polling or other type of opinion research so you’ll know what issues and problems are foremost on your voters’ minds.

State each problem, describe how you’d like things to be better, and outline the steps you believe that can be taken to get there.

While you need to show that your plan is realistic, be careful not to get into too many specifics with your solutions to these problems.

While you need to know the specifics for when you are elected, and when people ask you for details, giving specifics and details in your stump speech will bore your audience.

Excited voters do, plus they tell their friends to vote for you.

One of the biggest pitfalls candidates for elected office can face is making it all about themselves.

While you may be the one running, elections are not about candidates.

They are about voters.

Elections are where the voters get to have their say on people and policy.

If you make it about you, you’ll fall into the “I, me, mine” trap, become labeled as a “politician” and turn off the voters you need.

When giving your stump speech always change the word “I” to the word “we” when it’s possible.

Clearly, when talking about where you grew up, went to school, work, and your family, you’re going to use “I.”

But when you are talking about what you want to do in office, things that you’ve been a part of in your community, or accomplishments you were involved in as part of a larger organization, use the word “we.”

Speaking to your audience with the word “we” creates a bond and buy-in with your ideas.  That’s the effect that you’re after with your stump speech.

She had supporters say, “I’m with her.”

It didn’t work because she was asking the voters to focus on her as the candidate — rather than focusing on the voters and the shared mission they were on together.

Donald Trump spun that around masterfully and told his supporters “I’m with you.”

Closing your stump speech the right way is important.

After you’ve listed what you want to do in office, tell the audience that you can’t do this without their help.

Weaving “we” throughout your stump speech ties this in nicely for your finish.

If you’re talking to voters, ask them for their votes.

If you’re talking to donors, ask them for their contributions.

If you’re talking to leaders of an organization that endorses, ask them for their support.

There’s no reason for anyone to give you what you want unless you specifically ask for it.

As one professor I had always said, “If you don’t ask, you don’t get.”

Make the ask then it’s time for you to go.

End by thanking your audience for their time.

Always do this. Tell them you appreciate taking the time to listen to you.

If you follow these six rules you’ll be able to craft an effective stump speech.

Go figure yours out and write it out word for word.

After you write it out, go and learn it.

Learn it and practice your stump speech, but don’t memorize it.

You don’t want to come off like a robot.

If it helps, write an outline of our speech and refer to that when you’re speaking.

The first speech you give will likely be difficult and you may hate doing it.

You’ll get better at it each time you speak.

Before you know it you won’t need an outline to refer to, you won’t be nervous, and people will be coming up to you when you’re finished telling you what a great speaker you are.

Now if you’d like to go deeper and learn exactly how to write, rehearse, and deliver a solid stump speech, tap this link for instant access to the premium course Secrets of a Winning Stump Speech. 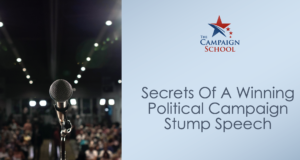