The Pros and Cons of Running for Office Against an Incumbent 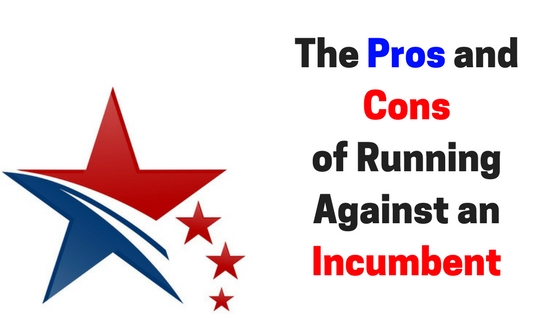 They say it’s hard to beat an incumbent and there’s plenty of data to back that up.

But that doesn’t mean it’s impossible if you’re challenging someone for their seat.

You just need to be realistic about the endeavor.

I actually enjoy running races against incumbents, especially those who the insiders say are unbeatable.

There’s nothing more gratifying for a candidate or a consultant than to beat an allegedly unbeatable candidate.

In fact, there’s no such thing as an unbeatable candidate.

Everyone elected to office can be beaten if the circumstances are right.

And in America today there is such a high level of dissatisfaction with elected officials that there are plenty of opportunities for a challenger to take an incumbent out in an election.

Now before we get too far down the throwing career politicians out of office road, let’s first consider the three main advantages incumbents enjoy in an election.

Incumbents generally have higher name ID than their challengers right out the gate.

Having campaigned for office already, the incumbent’s name has been out there.

Once elected, the incumbent’s name out there –  through the press, social media, and constituent service and communications.

A savvy incumbent will work their district the entire time they are in office, thus maintaining and sometimes growing their name ID.

Having a name that’s top of mind with the voters does go a long way.

It’s not the only element in a campaign, but it is quite important.

If it wasn’t, our streets wouldn’t be littered with campaign signs in the weeks leading up to an election.

Con #2: An Established Base of Support

That election was won by not only having a winning message but by building a solid base of support.

Unless the incumbent broke a major campaign promise, got caught in a scandal, or did something monumentally stupid in office, there’s no reason for those committed supporters to support a challenger.

That is as long as the incumbent has been staying in contact with their supporters and adding to their base.

It’s going to be difficult to dislodge an incumbent if they have not done anything too boneheaded and if they’ve been working their supporters while in office.

The people who whine and complain the most about money in politics generally complain about the fundraising advantages that belong to an incumbent.

It’s a legitimate beef if you believe that all candidates should start a race completely equal.

But that’s not the real world where elections are won and lost.

In the real world, incumbents have a fundraising advantage.

This is true for two reasons.

First, an incumbent can spend two, four, or six years in office raising money for their re-election campaign.

In contrast, most challengers will only be raising money for a few months, maybe a year.

Second, donors prefer to give money to the candidates they rightly or wrongly believe are safe.

Incumbents have a history in office and a voting record that projects that perception of safeness.

Donors know what they are going to get from that person, even if they don’t always agree with the incumbent.

And since incumbents often win re-election, that also helps make them a safe candidate to contribute to.

Now don’t get depressed if any of these advantages incumbents have seem insurmountable.

You can work hard and increase your name identification, build a solid base of supporters, and raise enough money to be competitive against an incumbent.

And the main reason you can do that is is because of the disadvantages incumbents often carry with them into their re-election.

Here are the three main pros for candidates challenging an incumbent:

The best thing about running against an incumbent is the fact that they have a record from their time in office.

You absolutely need to dig into that record and find things to point out and run against.

There’s no reason for the voters to toss someone out of office unless they’ve done something they voters don’t like.

And every elected official has done at least one thing that their constituents disagree with.

Use such “bad votes” by the incumbent, their personal spending record, and even weird quotes they’ve made.

With Twitter and Facebook out there, its never been easier to grab a dumb quote for any elected official.

Contrast yourself with the incumbent, especially if there’s a public record of what they’ve done.

Make the incumbent’s record an issue of the campaign.

Force them to explain why they did what they did.

George W. Bush did this to John Kerry in 2004 about his record on funding the war in Iraq.

Senator Kerry responded by making the unbelievable and unforgettable remark, “I actually did vote for the $87 billion before I voted against it.”

Many good people who run for office with high ideals and a desire to do good for their community.

Sadly, they often lose their way after they win.

This does not typically happen overnight. It’s a gradual process that happens over a term or two in office.

It has been referred to as “going native.”

This happens when an elected official start concerning themselves less with what their constituents think on a matter, and instead listen almost exclusively to a small group of “insiders.”

Insiders at every level of government constantly validate the incumbent by telling them time and time again that they are doing a good job.

These cozy relationships are not corrupt, nor do they always result in a bad vote or a flip-flop on a campaign promise, though that can happen.

The problems often show up when an incumbent is unaware of a major issue that’s aggravating his or her constituents.

Rather than keeping their ear to the track, the incumbent listens only to the insiders who have a much different priorites than the public does.

When this happens an incumbent has provided a challenger with a major opening with the voters.

The worst trait any elected official can have is arrogance.

It’s the one thing that voters tend to punish time and time again.

Why do you think that even when the economy was roaring, Donald Trump still struggled to have a positive approval rating as president?

Arrogance is dangerous to any political career.

But it isn’t always the obvious arrogance that takes them down.

Incumbents allow themselves to become arrogant – or at least perceived as such – because of the fact that they are incumbents.

They know incumbents win most elections because they have solid advantages in Name ID, supporters, and cash on hand.

They assume that’s enough to ensure a re-election victory.

Rather than working their butts off, they phone it in, then wonder why they lost on Election Night.

How does this happen?

Because the voters can tell if a candidate takes them for granted.

When they believe that’s the case, they find another candidate to cast their ballot for in the Election.

That alternative is the candidate who works the hardest campaigning and makes a real connection with voters.

Incumbents who don’t think they have to work as hard at re-election as they did the first time they won office are kidding themselves.

Their arrogance is leading them down the wrong path, a path that almost always leads to defeat.

Don’t fear running against an incumbent.

Know going in that they will have built-in advantages over you.

That does not mean you are going to lose. You need to work hard to beat an incumbent

If the person you’re challenging has become arrogant or out of touch while in office, you’re in a good spot.

But even if not, they have a record in office that you don’t have.

Exploit their record and make your case to the voters that it’s time for a change.

That’s always been the best way to beat an incumbent and it still is.