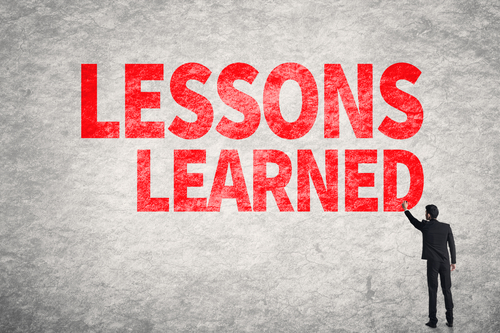 Not all candidates win their first election. In fact, most first time candidates don’t win.

My uncle lost three times before he won his first election, then went on to serve 16 years in office.

Often it’s the lessons learned from campaign mistakes of the past that help candidates win their next election.

“The only real mistake is the one from which we learn nothing.” – Henry Ford

I’ve won  88% of the campaigns where I’ve served as the lead consultant.

I’m very proud of that fact and the service I’ve been able to provide those I’ve had the privilege to help win their elections.

Now, being completely honest and candid, I must admit that not every campaign I’ve worked on has been victorious.

In fact when I first started working on campaigns, I was involved with a long streak of losing races.

However, those losses didn’t stop me. They taught me.

They educated me on some important campaign principles I carry with me today that have helped me win so many elections over the years.

Lesson 1. You Must Raise Money

Steve Clute’s campaign in 1996 was the first I ever worked on. I was his campaign manager.

To be honest, there wasn’t much of a campaign to manage. It was pretty much me and Steve. Why?

Because Steve wasn’t the most proficient fundraiser.

Without money he couldn’t communicate to the voters and convince them to remove Jim Battin from office.

On Election Day, Battin walloped us and I learned an important lesson – if the candidate doesn’t raise money, you’re not going to win.

That’s why you must commit to raising money if you decide to run for office.

I was sent to help out on Phil Hawkins’ State Assembly campaign against incumbent Sally Havice in 1998.

Phil had previously held the seat, but lost a Senate race two years prior, and was attempting to win back his former Assembly seat.

Phil was in solid shape. He was raising a lot of money, had plenty of mail going to the voters, and walked a lot.

What does Downey Hospital have to do with his Assembly race?  Everything it turned out.

When Phil was in the Assembly, he authored a law that exempted Downey Hospital from California’s open meeting law, the Brown Act.

This was appropriate because Downey Hospital was not a public hospital and as a private entity should not subject to the meetings laws of public bodies.

Few if any people objected to this change.

Then Downey Hospital went under and Phil Hawkins decided to run for the Assembly.

This accusation wasn’t the least bit true, but it was easy for the voters to understand and paint Phil as the bad guy.

This perception about Phil Hawkins helped undermine his credibility and attributed to his defeat.

In the 2000 California Primary, I served as the campaign manager for Russ Bogh.

Russ was running in an open seat for the State Assembly. He and a local mayor, Jan Leja, were the two funded and serious candidates in the race.

Leja, had a good deal of baggage coming into the race, and our campaign was poised to exploit it.

Leja’s consultant knew it and acted proactively. He attacked Russ for coming from a successful family that was able to help finance his campaign.

Leja’s campaign labeled Russ as a “silver spooner” who was going to smear Leja because he didn’t have any ideas or experience to offer in the State Assembly.

Despite our fact-based attacks on Leja, she shrugged them off.

Russ had been defined in the minds of the voters in a way that turned them off.  Russ lost to Leja that spring.

(Sidenote  Later that year Jan Leja was convicted of campaign finance violations and didn’t take the Assembly seat she won that November. Russ wound up winning the seat in a Special Election and served three terms in the California Assembly.)

I went to help out a campaign in San Diego County in 2002. It was a State Senate race between Charlene Zettel and Dennis Hollingsworth.

There’s no way to deny that Charlene was far more qualified to serve in the Senate than Dennis Hollingsworth.

Charlene had a fair deal of accomplishments in her two terms in the State Assembly, while Dennis hadn’t had a single one of the bills he authored passed by the Legislature.

However, as in the case of Phil Hawkins, Charlene had a bad vote on her record.

In the Assembly, Charlene had voted to allow illegal immigrants to pay in-state tuition at California’s universities and colleges.

In a very conservative district in a closed Republican Primary, that one vote turned out to be deadly. And Hollingsworth’s campaign handled it brilliantly.

In a district like that one, only a few months after September 11, 2001, you can guess how it went from there.

Hollingsworth won in a landslide and miraculously went on to become the Minority Leader of the California State Senate.

More importantly, I learned the power of a simple clear distinction between candidates that I still use today.

After Russ was term limited out of the California Assembly he decided to run for the State Senate two years later.  He faced off against another Assemblymember facing term limits, John Benoit.

Having learned his lessons from the first campaign against Jan Leja (even hiring her former consultant Steve Presson to serve as his lead consultant), Russ knew the importance of defining your opponent early.

And unlike Charlene Zettel, we weren’t going to allow John Benoit to run to the right of Russ in a closed Republican Primary.

His voting record in the Assembly many times betrayed the conservative principles he pretended to uphold.

To undermine his conservative base, we devised a flyer pointing out all of Benoit’s hypocrisies.  I even came up with the label “Gray Davis Republican” tying him to the Democratic governor recalled from office in 2003.

The flyer had the intended effect.  Benoit was reeling, but we’d made one crucial mistake – we’d launched the attack too early.

The Election was still months away, and while we’d shocked political insiders, the voters weren’t paying attention.

Benoit regained his footing, regrouped, and recast his image.  Benoit took every point of attack in our flyer and introduced legislation that would inoculate him from the attacks.

By Election Day, Benoit was again portraying himself as the darling of the right-wing and the farthest thing from a “Gray Davis Republican.”

He won the race handily and I learned never to launch an attack too early.

Timing in politics is crucial.  It’s just as dangerous to be too early as it is to be too late.

Had we sent the Gray Davis Republican flyer as a mailer four weeks before Election Day, as Hollingsworth had done in his attack against Zettel, I’m pretty sure Russ Bogh would have been elected as a Senator.

This is without a doubt the hardest loss for me to talk about.

Rod Pacheco is the guy who brought me to the dance.

When he was in his first term in the State Assembly, I interned for him.  He later brought me on to his staff, first in the State Capitol and then in his District Office.

I served on Rod’s Assembly staff for 5 years and only left when he was termed out of office in 2002.

A prosecutor by profession, Rod went back to the Riverside County District Attorney’s Office where he had worked before.

In 2006 he was elected District Attorney. Four years later he was challenged by a former prosecutor and a sitting judge, Paul Zellerbach.

Many of Rod’s vocal critics in the community were egging Rod on to face off against Zellerbach in multiple forums and debates. For the most part, Rod refused to participate.

I concurred with the decision, as the only voters who typically attend forums and debates are people who already support a candidate. Forums and debates don’t sway voters. They only take up time.

While nothing could be gained by participating in the circus these events were, it turned out there was a downside.

Zellerbach and Rod’s detractors, including the local newspaper, attacked Rod for appearing arrogant and unwilling to appear in front of the voters.

It didn’t matter that Rod had torn Zellerbach to shreds at the one forum he did attend, Rod’s opponents kept beating the drum.

Sadly, that perception of Rod Pacheco, just like the one of Phil Hawkins, stuck and he lost.

So while forums and debates may seem like a waste of time that don’t help any candidates win any new votes, you have to attend them to avoid being painted with a negative brush in the eyes of the public.

(Third side note:  Paul Zellerbach may have won that election, but four years later he lost after being caught tearing down his opponent’s sign.)

Also on his team was Barry Nestande, John Benoit’s consultant. Barry served as the lead and together we worked to help Frank get re-elected to the Riverside City Council for a third term.

Frank however didn’t want to walk precincts and knock on doors.  He was good with doing mail, putting up signs, and paying for phone calls, but he wasn’t going to walk.

As Frank told me, “If the voters don’t know what I’ve done after eight years, why should I go and tell them?”

Because they needed to know you wanted the job, Frank!

Neither Barry nor I could convince him to go out and walk. I don’t think we tried too hard either, as we didn’t take his opponent Paul Davis all that seriously.

We should have. Paul Davis beat Frank Schiavone in a very close race.

It reminded me of something I already knew – the candidate who walks the most, usually wins.

Given his fundraising ability and all the other campaign actives that Frank did, if he’d only walked door-to-door for eight weeks or so, he would’ve won re-election.

He didn’t. The voters didn’t believe that he was serious about wanting to keep the job, so they gave it to someone else.

So no matter how many times you’ve been elected or re-elected to you office, if you don’t take the time to walk precincts, there’s a good chance to voters will remove you from office.

None of these losses were easy, some of them, like the defeats of close friends like Rod Pacheco and Russ Bogh, effected me deeply.

However, a loss isn’t meaningless if you learn something from it.

This list shows some of the things I’ve learned from loss that have helped me go forward and win campaigns.

As a candidate I hope you will not only learn from these losses I’ve shared, but learn from the losses of other candidates your know, including whenever you may have lost an election.

And always remember this:

“Success is not final, failure is not fatal: it is the courage to continue that counts.” – Winston Churchill